We’re proud to have made a great hat celebrating a great Chelsea side and named it after a terrace hero! They might not have won the Premier League, the First Division as it was then, or any major cups since 1970, but the 1988/89 Chelsea side played some scintillating football, kicking off their stunning season at Leeds with a great John Bumstead goal! 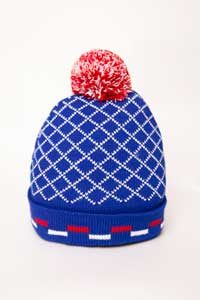 The hat is a celebration of the home kit worn by the blues that season, with it’s distinctive white diamond pattern. The neck of the shirt is reflected in the turn up of the bobble with the red and white checks also designed into the bobble. The hats were made exclusively for us in the UK, and we only did 50. They are bespoke and unique, something different and limited edition to set you apart.

The Chelsea side that year had many heroes, Kerry Dixon, Kevin McAllister, Kevin Wilson and even Gordon Durie, who we shall ignore, for the purposes of nostalgia, signing for Spurs. The team scored 96 goals, a phenomenal number, and amassed 99 points as they swept all before them, kick starting their incredible season with a win at Elland Road and that Bumstead goal. This is what we celebrate in this limited edition hat!

You can buy the Bumstead Bobble Hat here.

We have other products for Chelsea fans here.

Who are footballbobbles.com? Football supporters from the North East of England who love football and have fond memories of terrace fashions of the 70s, 80s and 90s. We’re strictly independent, a small business making unique items.