Bang went all the Christmas spirit on Boxing Day after the 0-2 defeat against Southampton. For all of the enjoyment of the 0-2 victory at Tottenham, the Southampton defeat made us realise that we need to break teams down at Stamford Bridge quicker, otherwise we’ll end up in the same unfortunate predicament as we have done against West Ham and Bournemouth.

Home form must be forgotten tomorrow though as we travel the short distance to Arsenal for a meeting against David Luiz and new Gunners boss Mikel Arteta. Luiz left Chelsea at the start of this season and took a backward step to go to the North Londoners.

Arteta comes to Arsenal after leaving Manchester City, where he was Pep Guardiola’s assistant. This surely is another backward step for his own career, as Arsenal look like a spent force.

Our last meeting against Arsenal was in Azerbaijan where we won 4-1 in the Europa League Final. Arsenal needed to win that game to give themselves a crack at this seasons Champions League, but the 4-1 Chelsea win consigned them to another season of playing Thursday night football.

Apart from Manchester City and Everton our away form has been sparkling in the league. The 0-2 victory against Jose Mourinho’s Tottenham was the best result and performance away from home this season. The 2-5 win at Wolves also provided plenty of skill and showed what Frank Lampard’s Chelsea can do away from home.

Many Chelsea fans should be extremely pleased with our current league position, especially after bringing six academy players into the first team set up where they haven’t looked out of place.

Of the older generation, Willian has been in fine form recently; even against Southampton he was tracking back and finding as much space as possible. Should he start on Sunday, he could end up being the match winner, much like against Tottenham.

Mason Mount has shown maturity above his age too and surely could be a contender for Player of the Year come May. He missed out during the first half of Southampton as he’d not felt well, but let’s hope that he’s fit and raring to go at the Emirates.

Tammy Abraham is also a contender for Player of the Year, don’t be surprised if he manages to grab a goal tomorrow. A David Luiz own goal would be quite amusing at the same time, sadly for me his own cult status at Stamford Bridge has gone from cult, to something else that sounds like cult.

Frank may revert from the 3-4-3 that he played against Spurs and at home to Southampton to accommodate Mateo Kovačić after his suspension. It’ll be a toss up between Callum Hudson-Odoi and Christian Pulisic on the wing with Willian on the other side. If fit again, Mason Mount should see a return.

In these games against rivals, I can only ever see a Chelsea win. I’m taking us to win 1-4.

HAPPY NEW YEAR from us all at Chelsea Independent.

My previews this season are dedicated to the memory of Trizia Fiorellino who sadly passed away in October. RIP Trizia. 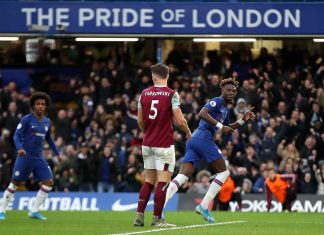 James Edwards - January 13, 2020
0
Monday 6 January Tottenham Hotspur U23 0:1 Chelsea U23 Armando Broja provided the one moment of class on a night of cold toil for both sides. The...

Joe Strummer – A Riot of my Own

ABOUT US
In memory of the Chelsea Independent. A totally autonomous collection of Chelsea supporters who dared to have a different opinion to Ken Bates on any or all things Chelsea.
Contact us: [email protected]
FOLLOW US
© Unofficial Chelsea FC News - Chelsea Independent