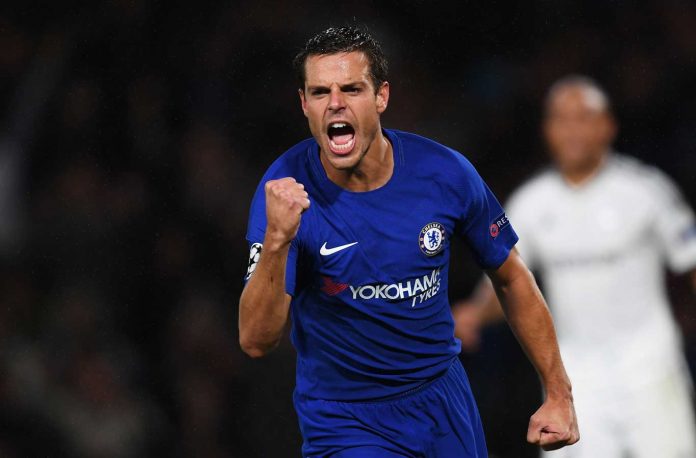 Chelsea’s champions league campaign began with what turned out to be a routine win against the champions of Azerbaijan, Qarabag.

Antonio Conte chose to make a few changes to the side after the away win at Leicester on Saturday, as we enter a busy period of fixtures.  Three home matches in eight days follow on from victory at the king power stadium, starting with this opener to our european season.  Davide Zapacosta came in for his debut in the right wing-back role, while Andreas Christensen started in the middle of a back three also containing the returning Gary Cahill and Cesar Azpiilicueta.  Batshuayi started upfront, with Pedro and Willian either side.  Hazard made the bench.  Fabregas and Kante were the central midfield pairing in a 3-4-3 system.  Qarabag matched our shape, but that was about all they matched us for over the course of the match.

The visitors offered their only threat in the opening five minutes, as they got in behind to force a corner early, but Chelsea soon took charge of proceedings.

Alonso had already had a shot saved after being found in space on the left, before we registered the opener with only five minutes on the clock.  Increasing pressure on the opposition had forced a corner on the right after Sadygov’s block went behind.  Fabregas took it short to Willian, Qarabag weren’t switched on, and Willian laid it into the path of Pedro on the edge of the D, who swepped the ball into the top right corner via the keeper’s finger tips.

Chelsea took complete control from here on in.  Initially Qarabag marked tighter in the middle, but with Willian and Pedro dropping deeper, and the Azerbaijani side not willing to pull defenders too high up the pitch to pick them up, Their central midfield pair started to drop deeper to to counteract this.  This meant that Kante and Fabregas were given more space in the centre, and able to dictate play.

As our possession increased, so inevitably did our chances.  Batshuayi fired into the side-netting after Sehic in the Qarabag goal narrowed his angle on the left side of the area.  Kante also advanced in space  to shoot from 20 yards, all be it straight at Sehic.

The second goal was to arrive before half time, and it came from the debutant Zappacosta.  A worryingly simple goal to concede from Qarabag’s point of view.  Courtois rolled the ball out to the Italian in the right full back position, he advanced down the wing, his change of pace took him past both the Qarabag winger and wing-back in one swift move.  As he approached the area, he looked up, and catching the keeper out of position, whipped the ball straight into the goal.  Whether he spotted the keeper out of position, or if it was a miss hit cross, only he will know.  Either way it gave us a two goal cushion at half-time.

The second half was attack versus defence.  Qarabag sat deeper as a result of their midfielders dropping back, inviting us on.  They still could not deal with Willian in particular.  Dropping into the hole between defence and midfield, he had an exceptional match.  When they went tight to him he was able to turn and run in behind at will, when they sat off him he linked brilliantly with Batshuayi and Pedro.

The third goal was the second conceded from a set-piece by Qarabag.  This time from a free-kick on the left.  Fabregas finding the head of Azpilicueta to effectively kill the match.

Hazard and Bakayoko were introduced either side of the hour mark, and the match started to resemble a friendly, with Chelsea running riot.  Hazard Batshuayi and Willian linked sublimely with one touch play around the area, Batshuayi touching the pass of Hazard round the corner to Willian, who played a one two with Hazard before crashing his effort against the bar.  Pedro also linked well in a flurry of one touch passes with Hazard and Batshuayi before firing over.

Bakayoko himself got on the scoresheet after Hazard’s cross found him in the box, and his effort deflected past the helpless Sehic.

There was now just under twenty minutes remaining, and Qarabag were desperate for the final whistle.  They now sat deep without really marking anyone, and looked decidedly static.  Powerless to prevent the Chelsea onslaught.  Batshuayi added to their pain with a deserved goal, turning his marker excellently on the  edge of the box and firing low into the bottom corner.

The sixth and final goal was an unforced error from Qarabag.  In the second half in particular they had often surrendered what possession they had far too easily with misplaced passes.  This time a defender was caught on the ball on the edge of the area, Zappacosta crossed, and Batshuayi went for it with Medvedev, who got the final touch over the goal-line.  This capped off what was a tough introduction to champions league football for the visitors, and an emphatic return to europe for Chelsea.

Things will get tougher from here on in for us in this competition though.  Whether we progress from the group will not be decided on results against Qarabag, it will come down to the results between the other three sides respectively.  There will not be any 6-0 results to be found in those fixtures.